By Gillian Bell4th November 2022No Comments 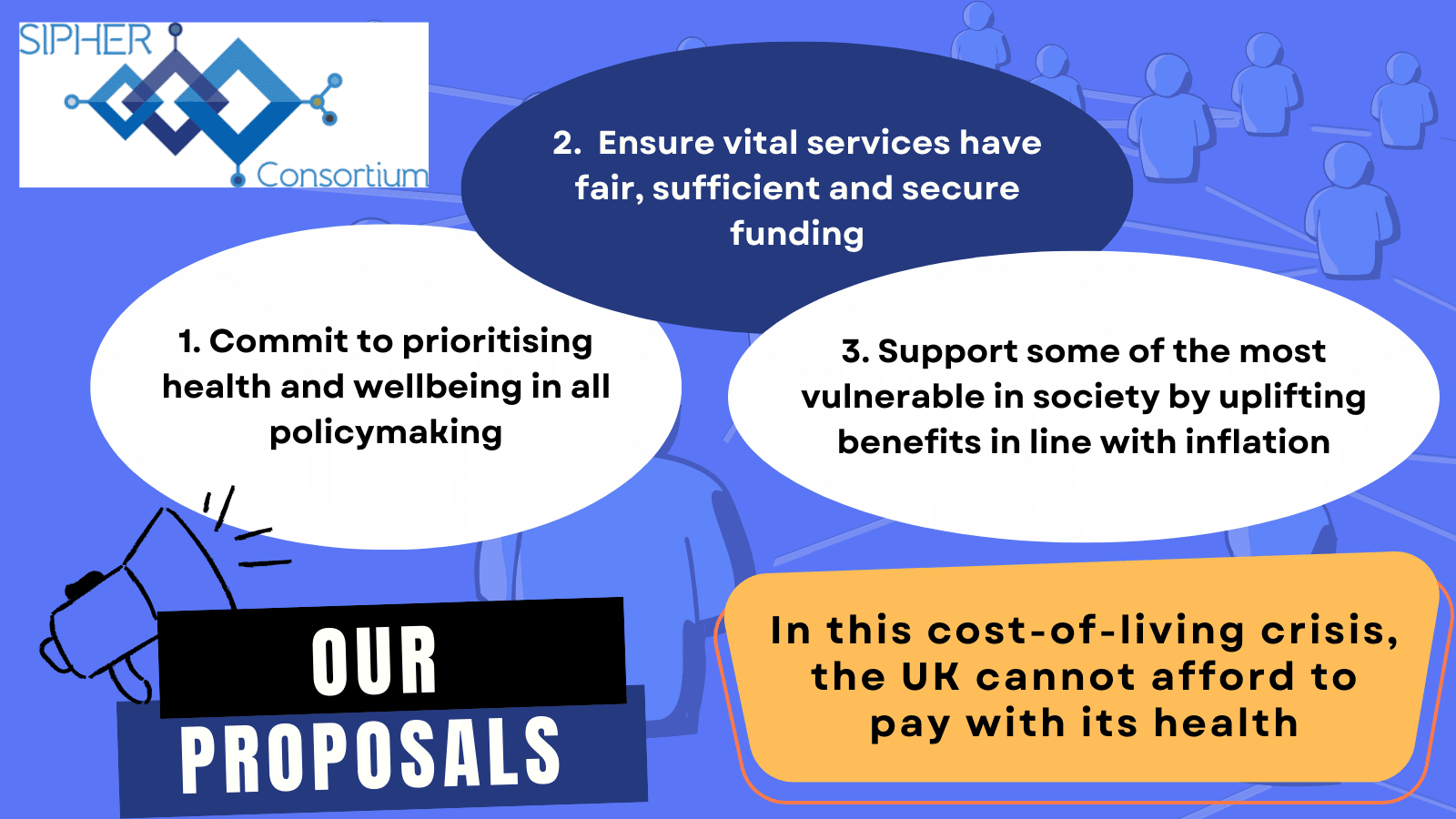 In his first speech as Prime Minister Rishi Sunak acknowledged that we are in a ‘profound economic crisis’ with ‘difficult decisions to come’, whilst also reaffirming his commitment to 2019 manifesto promises including ‘levelling up’. The forthcoming autumn budget represents an opportunity to firmly establish the importance of good population health for the UK economy.

Health inequalities in the UK are stark, and the consequences are playing out in the lives of people across the UK. Those in more deprived areas of the UK have lower life expectancies and spend a higher proportion of their lives in poor health. As we recover from Covid-19 and face a cost-of-living crisis millions more people are set to enter poverty, and those expected to support them- public services and the voluntary sector such as our policy partners and community panels, are facing increased pressures with inflation, soaring energy costs, books to balance and real-term funding cuts. Last week, the Prime Minister stated that his government ‘will not leave the next generation…with a debt to settle’, yet if preventative measures and the necessary social infrastructure to enable it are not prioritised now it is not clear how this can be achieved.

Over the last year and a half, SIPHER has been exploring the concept of Inclusive Economies from a systems-science perspective, developing new methodologies to help policy partners analyse the health impacts of different policy choices. Working within a multi-partner consortium alongside policy partners and community panels during uncertain and challenging times has clarified to us some of the most pressing overarching challenges facing us all working to tackle health inequality. In order to address these challenges the new government should consider the following three policy recommendations.

1. Commit to prioritising health and wellbeing in all policymaking

Our earlier blog examining the ‘Levelling Up White Paper’ noted a lack of clarity and policy detail needed for impact in reducing the scale of health inequality that the UK faces, and there was less of a core focus on health than hoped. The government must ensure that work to improve population health and well-being is not siloed in government departments, and comprehensively ensure that policy aligns in this area whether through the ‘Health Disparities White Paper’ or other mechanisms. With that hope, we add our voice to a large list of organisations and individuals[1] calling for the publication of the much anticipated ‘Health Disparities White Paper’ in 2022, and after recent uncertainty would like to see the publication date confirmed as soon as possible.

Economic growth is reliant on good population health, and in order, to enable this we need the social infrastructure to deliver key services and support all populations with their needs. The government needs to acknowledge and act upon the well-established link between prosperity and health and the vital nature of sufficient public funding, there is much work is happening in this area that the government can tap into[2]. In England, local government is facing a funding gap of £3.4 billion in 2023/24 and £4.5 billion in 2024/25[3], and the Association for Directors of Public Health warn that a reduction in public health funding will impact the most vulnerable. Analysis from the Health Foundation has shown that the public health grant has been cut by 24% on a real-terms per capita basis since 2015/16.[4] Outside of local government, the role of the voluntary sector must also be equally valued, many of whom rely on small funding pots limiting their ability to plan for the future. Often they run services supporting people to enter employment, run physical activity and well-being activities, and support families with after-school activities and their social and economic value to the UK should not be overlooked. The government should commit to ensuring that local authorities and the voluntary sector have the funding and certainty needed. We know that if we return to an austerity era we will pay with our health, the evidence is clear with recent research that has shown that over 330,000 excess deaths in Great Britain in recent years can be attributed to spending cuts to public services and benefits following austerity.[5]

3. Support some of the most vulnerable in society by uplifting benefits in line with inflation

Political and economic uncertainty has created a lot of pressure on households across the UK, and state benefits support some of those most vulnerable to the impact of the cost-of-living crisis. We recommend that the government commits to uplifting benefits, including Universal Credit, at least in line with inflation. In doing so we are adding our voice to the many other organisations, groups and individuals that have called for this uplift.[6] Without this rise, the amount received will not be enough needed for many to survive, and will further entrench inequalities that will last for generations.

As the saying goes ‘health is wealth’ and this is a crucial time to act to prevent entrenching inequalities further and creating problems for generations to come. The cost of not doing so is simply too great.

[1] Those that have already called for its publication include: Inequalities in Health Alliance (155 member organisations), Health Inequalities Action Group (HIAG), Over 10000 child health professionals, Chair of the Women’s and Equalities Select Committee, Coalition of 47 charities and organisations

[2] Our own work as well as work from the RSA, and IPPR

[6] Others that have called for an uplift in line with inflation include the Resolution Foundation, Martin Lewis, the Work and Pensions Committee and Olivier De Schutter, the United Nations’ Special Rapporteur on extreme poverty and human rights.